Last week, the Democratic National Committee floated the idea of making South Carolina the first primary in the presidential nominating process, demoting the Iowa Caucuses and the New Hampshire primary. While I wish we didn’t have to think about the next presidential election yet, this news made me think about ethanol, our agricultural system, and the ways that existing structures – political, economic, social – keep us locked into policies that don’t make sense on a changing planet: zoning, energy, and beyond.

The United States grows the most corn of anywhere on the planet. Of all the states that produce corn, Iowa makes the most. It has also lost 99.9 percent of its native tall grasses to agriculture (mostly to corn). In the rest of the Corn Belt, 99 percent have been lost. In the U.S., about ⅔ of crop calories don’t feed people — they feed animals and car engines. For corn, about 40 percent is used on ethanol alone (and more than a third on animal feed).

As I’m sure many of you know, the U.S. has a renewable fuel standard (RFS), which requires that our gasoline contain a certain percentage of ethanol. It was enacted in 2005, as a way to both reduce dependence on foreign oil and cut greenhouse gas emissions, mainly by replanting crops that would offset the carbon dioxide emitted by burning them.

It has also meant that there is always a market for ethanol, and therefore an incentive to grow corn. As a result, corn production grew between 2008 and 2016 by nearly 9 percent, and expanded onto an additional approximately 7 million acres.

From 2006 to 2011, a study found that grasslands in the Corn Belt were converted to cropland at a rate comparable to the deforestation at that time in Brazil, Malaysia, and Indonesia. (Deforestation in some of those countries has risen in recent years, but it’s still an eye-popping comparison!)

But since the RFS’ beginning in 2005, few presidential hopefuls have expressed anything but support for the ethanol mandate because they want to win in Iowa, and Iowa has a lot of farmers, and a lot of those farmers grow corn or work for someone who does or for the industry sustained by this kind of industrialized, monocrop agriculture.

However, in the last few years, science has shown that the renewable fuel standard actually may not reduce greenhouse gas emissions compared to gasoline, and may actually be more carbon intensive as a fuel source.

A study published in February found that the additional corn grown (as noted above), along with other biofuel crops, increased fertilizer use by as much as 8 percent, (fertilizer production results in a lot of GHG emissions) and the presence of water pollutants by as much as 5 percent. It also found that the emissions from land use change (from non-crop land to crop land) were substantial enough that the carbon intensity of corn ethanol is no less than gasoline and is likely 24 percent higher.

That study didn’t exist at the time of the last Iowa Caucuses, but other studies have cast doubt on the emissions math of ethanol, like this one from 2014, which suggested that changes in soil carbon sequestration meant that the emissions intensity from ethanol was likely 7 percent higher than gasoline.

Things have also changed since then: vehicle electrification (if done right!) could reduce tailpipe emissions more than ethanol ever could have, and the U.S. is now a net exporter of energy. Now, oil companies and biofuel companies are on the same side – demonstrated clearly by the push from ethanol producers to build pipelines from ethanol plants to oil fields for enhanced oil recovery. 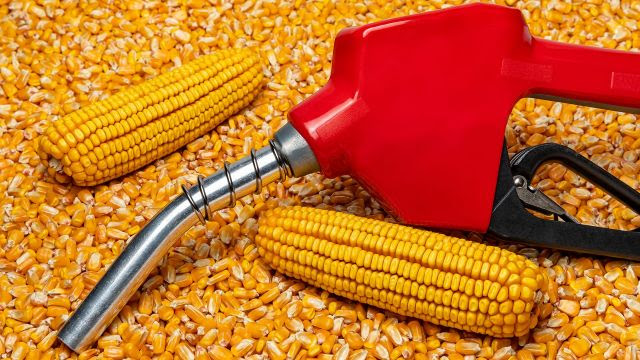 Some (or all!) of this probably occurred to many of you, but it made me think that, while I don’t have an opinion on whether or not Iowa should come first in the nominating process, I do think that our agricultural system, and the way we grow food (especially given massive population growth and drought in California that threatens the current way we grow food), should be the result of deliberate decision-making that is good for both people and the planet, and not the compromise someone makes because they want to be president.

I realize that it’s more complicated than just growing vegetables in the Midwest and reducing meat consumption in general. Behavioral changes are usually the result of incentives – like paying farmers to plant different crops or to use regenerative techniques that make for better water quality, less fertilizer use, and more soil carbon sequestration.

You probably don’t care about corn, and are sick of hearing about it. Me too, so am I! But I think it’s a very good example of this dynamic – where expedient decisions are made and the carbon calculations and other environmental damages aren’t part of the equation – of which there are many others.

The railroad industry, it turns out, is one of the nation’s biggest supporters of coal. Despite framing itself as essential to the clean energy transition (Better public transit means fewer people in cars! Better trains means fewer airplanes! Moving goods by rail is the most efficient way to do it!), the country’s biggest rail freight companies have been funding climate denial and opposing federal climate policy for decades. Why? Because nearly 70 percent of the nation’s coal is moved by rail, accounting for about 14 percent of the revenue of these large companies.

According to a 2019 study, rail companies said that they were responsible for only 0.6 percent of the nation’s carbon dioxide emissions in 2018. But, if the emissions embedded in their operations were taken into account, it added up to 16.5 percent of the total– more than all the farms in the U.S., or all of the buildings, or all domestic aviation.

Corruption and entrenched power in the railroads?! In the United States?! Whoever could have seen that coming!? 😉

The construction of the railroad in the 19th century was a corrupt process, generating wealth for the few at the expense of the many. It seems like that, in many ways, is still true, though the sources of money and the players may have shifted. (For more, definitely check out historian Richard White’s incredible book Railroaded: The Transcontinentals and the Making of Modern America.)

I think that is probably enough for today, but don’t forget that diplomats from around the world are meeting this week in Canada to discuss the biodiversity crisis I wrote about last time. Here is some excellent coverage:

Can the world agree on how to save its last wild animals? by Dino Grandoni(The Washington Post, news)

Can the U.N. Save the World from Ecological Collapse? by Elizabeth Kolbert (The New Yorker, analysis)

Those Adorable Endangered Creatures Are Not the Point by Michelle Nijhuis  (The New York Times, opinion)

More soon, and thanks as always for reading.