“As predicted, down to the minute, NASA’s Perseverance rover touched down in Mars’ Jezero Crater on Thursday at 3:55pm. If there has ever been life on Mars, this crater, an ancient lakebed, is a good place to look for it.

“Perseverance sent this back to us after landing. Credit: NASA TV via New York Times

“I find this all very thrilling, as I often do when it comes to space! (Other times, I have reservations…) But the news from that planet reminds of an astonishing fact I learned recently: Earthrise, the first photograph of Earth from space, taken on Apollo 8, a different space voyage, in 1968, existed before a photograph of a whale underwater, first captured in 1975.

“The ocean covers 70 percent of the planet, but more than 80 percent of it remains, in the words of NOAA, “unmapped, unobserved, and unexplored.” Every time I think about all of this I can barely believe it. It’s all right here! 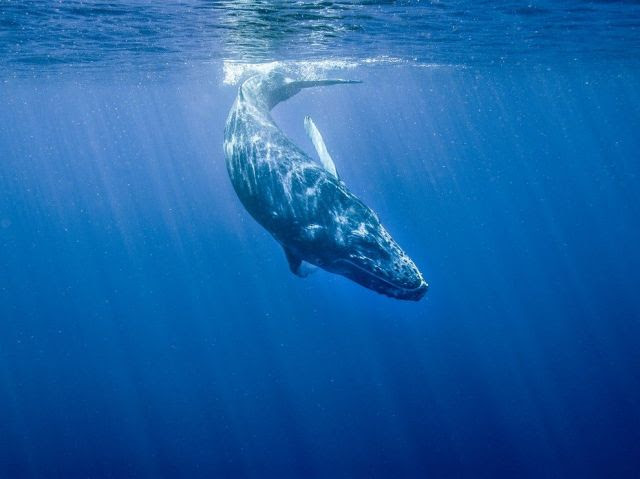 “This is not that photograph, but it is a whale. Credit: National Geographic

“And yet, every part of the ocean has been changed by human activity: from changing chemistry (more carbon dioxide, nitrogen runoff, less oxygen), to bleached coral reefs; from microplastics in the Marianas Trench and Arctic sea ice to overfishing. We dump our garbage and drill for oil and gas; we mine it for sand and diamonds; we build wind turbines and tidal power machines; we construct walls to protect ourselves from it, as if we didn’t help create the danger we think we can stave off.

“We also feed ourselves from the ocean and ship our stuff all over the world. The ocean has absorbed 90 percent of the excess heat from global warming. We also live on a planet whose weather is governed by its oceans and not its atmosphere, though that looks like it is changing (wavy jet stream and Arctic weather in Texas as possible proof).

“I know it’s a little obvious to write about whales and I’m running the risk that you might already know about all of this, but I have been thinking about them and the oceans more than usual lately, probably because I read an amazing book about whales called “Fathoms: The World in the Whale,” by Rebecca Giggs, an Australian journalist. And I wanted to draw out a historical tension inherent to discussions about whales: that the whaling industry of the 18th and 19th centuries was the first global extractive industry before oil and coal, but amazingly, fascinatingly, rare-piece-of-cool-good-news-ly, saving whales could be part of the way we fight against climate change.

“During their lives and when they die, whales help sequester enormous amounts of carbon dioxide in two different ways. The first is that they provide (via their waste) phytoplankton with the iron and nitrogen they need to grow. As photosynthetic organisms, phytoplankton draw down carbon dioxide from the atmosphere and release oxygen. Whales bring these nutrients up to the surface and spread them all over the world via their migrations. Phytoplankton are eaten by larger animals – zooplankton – and when both organisms die, they turn into what is called marine snow, and fall deeper into the ocean, thereby sequestering the carbon dioxide. 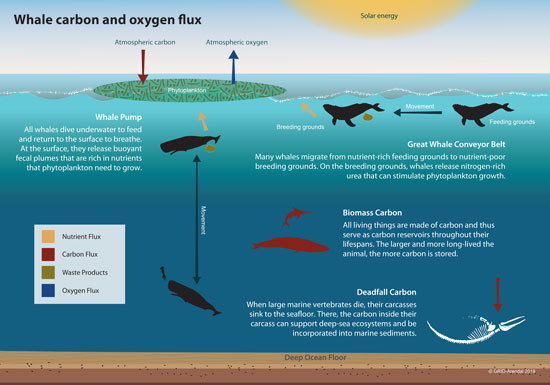 “This is probably a more effective explanation, but I paint pictures with my words. Credit: IMF

“The same thing, on a much larger scale, happens to whales: when they die, their bodies (made of carbon!) sink to the bottom of the ocean, where, over time, they become part of the marine sediment layer. They also support the growth of animals in the deep-sea ecosystem – gross worms, etc. Scientists estimate that a great whale can sequester as much as 33 tons of carbon dioxide, keeping it out of the atmosphere for hundreds or thousands of years. A tree, on average, absorbs 48 pounds of carbon dioxide every year, which may not be permanent. Some research also shows that trees may become less effective carbon sinks as the more carbon dioxide fills the atmosphere.

“If whales were allowed to return to their estimated pre-whaling number of 4 to 5 million (up from just over 1.3 million today), the possible carbon sequestration effect could be huge! According to an IMF report from 2019 on the economic and environmental value of whale conservation, “Even a 1 percent increase in phytoplankton productivity thanks to whale activity would capture hundreds of millions of tons of additional CO2 a year, equivalent to the sudden appearance of 2 billion mature trees.” Over the average lifespan of a whale – 60 years – the effect could be substantial. It’s not enough to fix everything, but it is something! 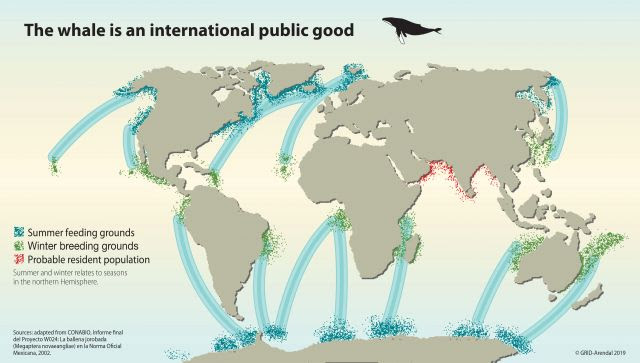 “(Just to hammer this home: the whaling industry had a direct effect on the composition of the atmosphere. “A century of whaling equates to burning more than seventy million acres of temperate forest,” said Andrew Pershing, a scientist from the Gulf of Maine Research Institute.)

“There is, as always, a cost. In this case, it costs a lot less than many other “climate solutions” with few of the tradeoffs that often characterize technological interventions, to say nothing of geoengineering. Each whale, the IMF estimated, is worth about $2 million – for its carbon sequestration powers (this assumes a mechanism like a carbon tax or other formalized cost of carbon emissions), and for the other benefits that whale conservation brings, like fishery improvements and ecotourism. 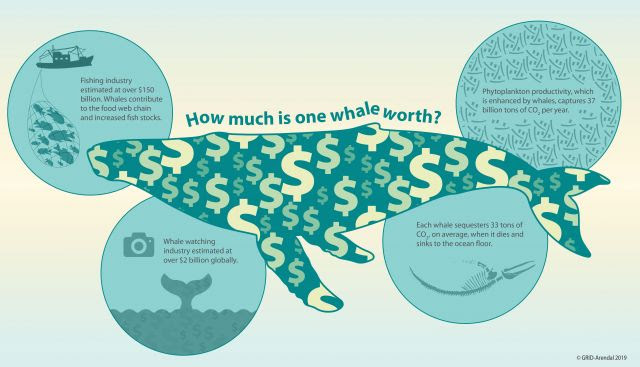 “Of course, there are reasons to protect whales beyond what they can do for us. Reading this book and other coverage of what happens to whales and other marine animals, it’s hard not to feel despair. (Although, there is a lot of amazing stuff in this book: the US Navy using beluga whales for recon, and one of them, a whale named Noc learned to mimic human voices, and told a diver to “get out of the water”!!!!!!!!!!!) Their lives are increasingly unbearable; the oceans are now loud and crowded with ships, barren of fish, full of plastic and other chemicals. Our survival depends on theirs. It always has, but it’s now just a lot more obvious.

“And there is a quote from the book that stopped my heart from shriveling up entirely: “Being hopeful follows from being useful; this has been my experience, and to be useful, it matters that you identify a part of the problem that you might see change in, using the talents and the resources that you possess. Hope is fellowship. Hope is in the doing. We may be the only species capable of imagining a future robbed of the wonder of encountering other species. This knowledge, in the end, gives us cause to start.”

“Speaking of natural solutions, I wanted to also share a story I wrote at the end of last year for the Washington Post about how adding a little bit of a certain kind of seaweed to cattle feed could reduce their dogrstivemethane emissions by about 98 percent.  There are challenges, as always, but still…pretty cool! 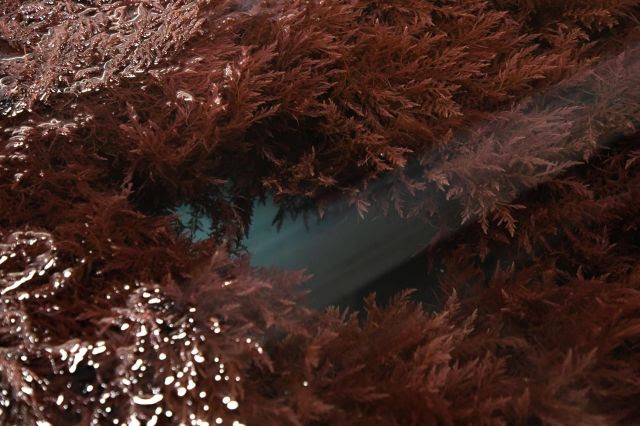 “And as always, I would love to hear from you about what you’d like to read about here. I think the gap between newsletters shows that it’s hard to come up with things to write about, especially when we’re all stuck in our houses!”