“I was thinking hard about the Amman demolition, puzzled as to what expedient would be quickest and best; and the puzzle of these ruins added to my care. There seemed evidence of bluntness of mind in these Roman frontier cities, Um el Jemal, Um el Surab, Um-taiye. Such incongruous buildings, in what was then and now a desert cockpit, accused their builders of insensitiveness; almost of a vulgar assertion of man’s right (Roman right) to live unchanged in all his estate. Italianate buildings—only to be paid for by taxing more docile provinces—on these fringes of the world disclosed a prosaic blindness to the transience of politics. A house which so survived the purpose of its builder was a pride too trivial to confer honour upon the mind responsible for its conception.” – The Seven Pillars of Wisdom, chap. 108

Completed in 1963, as America entered the Space Race, and Project Mercury soared in nearby Cape Canaveral, Florida the Arecibo Telescope was the world’s largest single-aperture telescope for 53 years.

It was America’s entry into world-class astronomical research. Before Mauna Kea and the National Radio Observatory’s Very Large Array, there was this at Arecibo. Built into a natural sinkhole in Puerto Rico, it was an audacious plan. First constructed for the United States Department of Defense at $9.7 million, it was the first to utilize such a large dish. The dish itself was not pointed at any celestial object, but was stationary as the instrument platform moved 150 metres above it, focusing the dishes immense capability. It was not just a “big ear”, but also a”big mouth’ equipped with radar and LIDAR ranging which allowed the detection and tracking of near-Earth asteroids.

On 1 October, 1969, The National Science Foundation assumes operations from The US Department of Defense, ushering an era of “firsts in research.” Some of those are listed in “new-note” below…

Fortunately for science, there is another radio telescope for humanity to use in its quest for knowledge of the universe, built in July 2016 by the PRC, the Five-hundred-meter Aperture Spherical Telescope (FAST) in China.

NSF is STEM and NASA is flush

At present, NASA has no interest in Earth-bound telescopes, but space-based instruments like the Webb Deep Space Telescope which will more than replace the Hubble. NSF is quickly turning many of its installations into educational centers and retreats with nominal research efforts, such as LIGO and Arecibo.

Perhaps this Trump legacy, then, was a forgone conclusion of empire. Not that of discovery and wonder, but one of rusting and collapse. 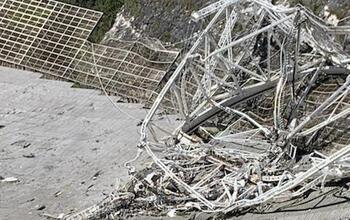 “The instrument platform of the 305-meter telescope at Arecibo Observatory in Puerto Rico fell at approximately 7:55 a.m. Atlantic Standard Time Dec. 1, resulting in damage to the dish and surrounding facilities.

“No injuries were reported as a result of the collapse. The U.S. National Science Foundation ordered the area around the telescope to be cleared of unauthorized personnel since the failure of a cable Nov. 6. Local authorities will keep the area cordoned off as engineers work to assess the stability of the observatory’s other structures.

“Top priorities are maintaining safety at the site, conducting a complete damage assessment as quickly as possible, and taking action to contain and mitigate any environmental damage caused by the structure or its materials. While the telescope was a key part of the facility, the observatory has other scientific and educational infrastructure that NSF will work with stakeholders to bring back online.

“We are saddened by this situation but thankful that no one was hurt,” said NSF Director Sethuraman Panchanathan. “When engineers advised NSF that the structure was unstable and presented a danger to work teams and Arecibo staff, we took their warnings seriously and continued to emphasize the importance of safety for everyone involved. Our focus is now on assessing the damage, finding ways to restore operations at other parts of the observatory, and working to continue supporting the scientific community, and the people of Puerto Rico.”

“The investigation into the platform’s fall is ongoing. Initial findings indicate that the top section of all three of the 305-meter telescope’s support towers broke off. As the 900-ton instrument platform fell, the telescope’s support cables also dropped.

Engineers arrived on-site today. Working with the University of Central Florida, which manages the observatory, NSF expects to have environmental assessment workers on-site as early as tomorrow. Workers at the observatory will take appropriate safety precautions as a full assessment of the site’s safety is underway.

“We knew this was a possibility, but it is still heartbreaking to see,” says Elizabeth Klonoff, UCF’s vice president for research. “Safety of personnel is our number one priority. We already have engineers on site to help assess the damage and determine the stability and safety of the remaining structure. We will continue to work with the NSF and other stakeholders to find ways to support the science mission at Arecibo.”

“NSF intends to continue to authorize UCF to pay Arecibo staff and take actions to continue research work at the observatory, such as repairing the 12-meter telescope used for radio astronomy research and the roof of the LIDAR facility, a valuable geospace research tool. These repairs were funded through supplemental congressional appropriations aimed at addressing damage from Hurricane Maria.

“Once safety on site is established, other work at the observatory will be carried out as conditions permit.

“NSF will continue to release details as they are confirmed. Additional information, including engineers’ assessments of the structure, can be found in NSF’s Nov. 19 news release.

“Although the platform’s fall was unplanned, NSF, UCF and other stakeholders, including engineering firms contracted by UCF, had been monitoring developments at the 305-meter telescope that indicated an increased risk of a collapse.

“In August, one of the 305-meter telescope’s cables unexpectedly detached. The remaining cables were expected to bear the load without issue as engineers worked on plans to address the damage. However, a second cable broke Nov. 6. Engineers subsequently found the second snapped at about 60% of what should have been its minimum breaking strength, indicating that other cables may be weaker than expected, and advised that the structure could not be safely repaired.

“Both cables were attached to the same support tower. If the tower lost another cable, the engineer of record noted, an unexpected collapse would be the likely result. Since NSF’s Nov. 19 announcement that it would plan for decommissioning of the 305-meter telescope,  surveillance drones found additional exterior wire breaks on two cables attached to the same tower. One showed between 11-14 broken exterior wires as of Nov. 30 while another showed about eight. Each cable is made up of approximately 160 wires.”

The U.S. National Science Foundation propels the nation forward by advancing fundamental research in all fields of science and engineering. NSF supports research and people by providing facilities, instruments and funding to support their ingenuity and sustain the U.S. as a global leader in research and innovation. With a fiscal year 2020 budget of $8.3 billion, NSF funds reach all 50 states through grants to nearly 2,000 colleges, universities and institutions. Each year, NSF receives more than 40,000 competitive proposals and makes about 11,000 new awards. Those awards include support for cooperative research with industry, Arctic and Antarctic research and operations, and U.S. participation in international scientific efforts.